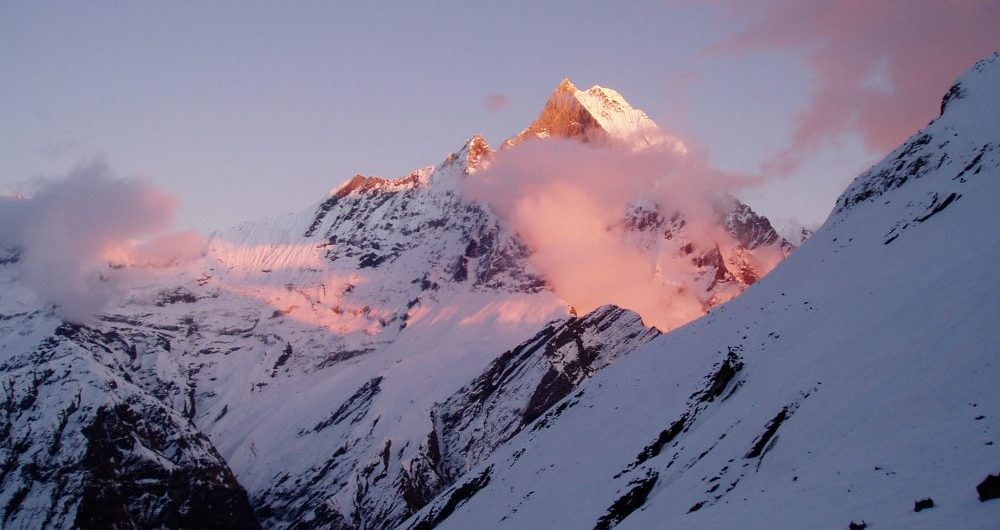 If you are wondering where to go trekking in Nepal, here is our list of top ten trekking trails in Nepal. The list has been made on the basis of the attractions, accessibility and popularity. 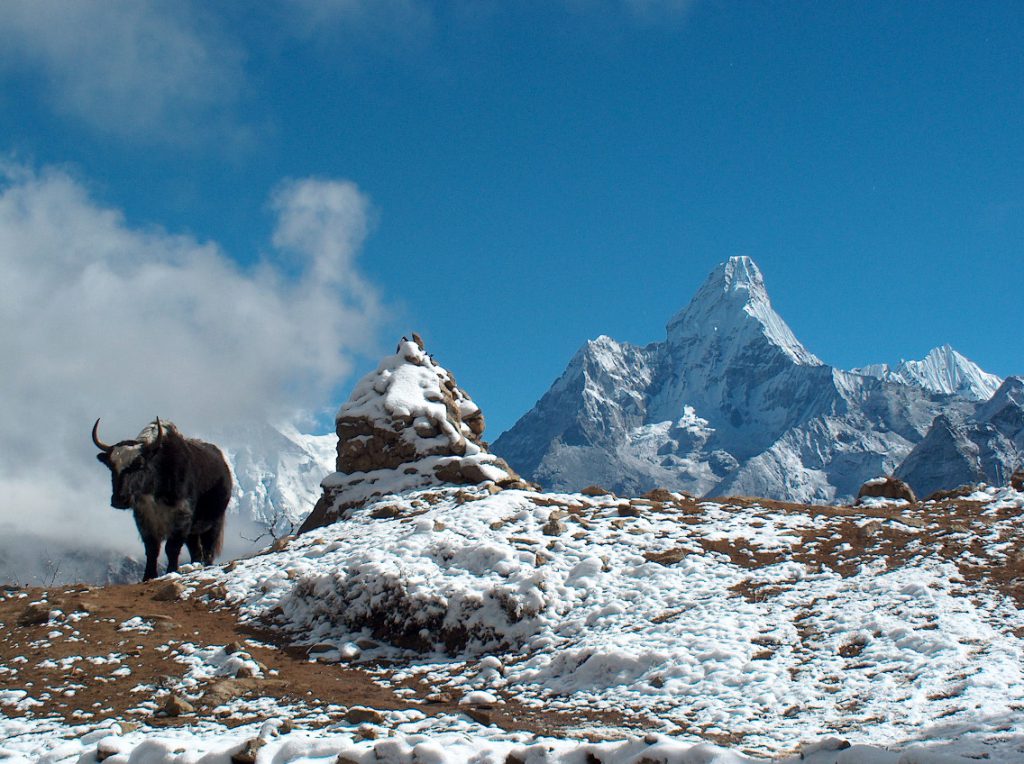 Everest Base Camp trek undoubtedly tops the bill when it comes to best trekking trails in Nepal. It is the same trail once used by the historic expedition of team of Tenzing Sherpa and Edmund Hillary in 1953. The trekking trail is home to Mt. Everest (8848m), the highest mountain on earth, along with Lhotse (8516m), Makalu (8485m), Cho Oyu (8201m), Nuptse (7861m), Ama Dablam, Thamserku etc.

The hike to Kalapathar (5643m) and Everest Base Camp (5364) presents you with spectacular views of Mt. Everest. The trail passes through beautiful Sherpa villages of Lukla, Phakding, Namche, Khumbu, Dingboche, Pangboche as well as the highest Himalayan monastery of Thyangboche. Much of the trekking area lies within Everest National Park, a world heritage site. It is known for rare species such as snow leopard, Himalayan thar, lophophorus and blue sheep. Getting to Lukla is easy from Kathmandu, as it takes only 30 minutes of adventurous flying. The food and accommodation are of the highest standards in Everest Base Camp trek with a tincture of Sherpa culture and hospitality. 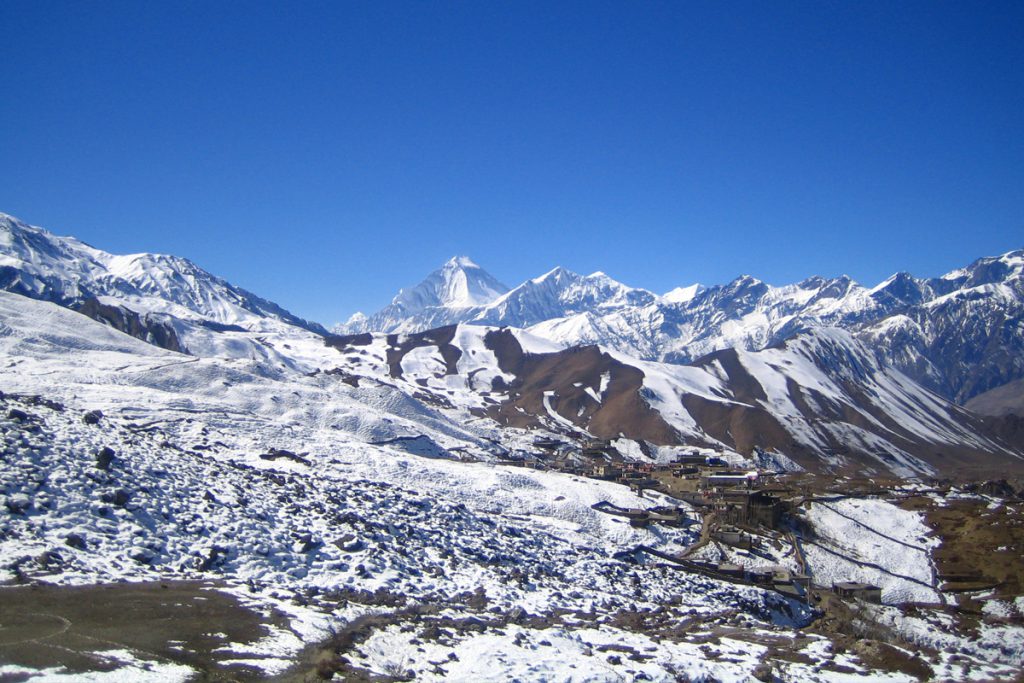 At second spot of our top ten list comes Annapurna Base Camp trek. By the traffic of tourists visiting every year, ABC trek is by far the most famous trekking trail in Nepal. Trekkers will be able to hike up to Annapurna Base Camp located at 4,090m for a towering view of south face of Annapurna I (8091m), which is the tenth highest mountain on earth. What is more spectacular is a spot called Annapurna Sanctuary, a natural amphitheater, which offers 360 degree views of mountains including Annapurna I (8091m), Annapurna III (7855m), Ganagapurna (7485m), Annapurna South (7279m), Machapuchhare (6993m), Hiunchuli (6,441m). Equally mesmerizing is the trek to Poon Hill (3210m) which offers additional views of Dhaulagiri and Annapurna ranges. The trail passes through mountains, waterfalls, rivers, and beautiful villages like Ghorepani, Choomrong, Ghandruk. These villages are inhabited by culturally rich Gurung and Magar ethnic groups. 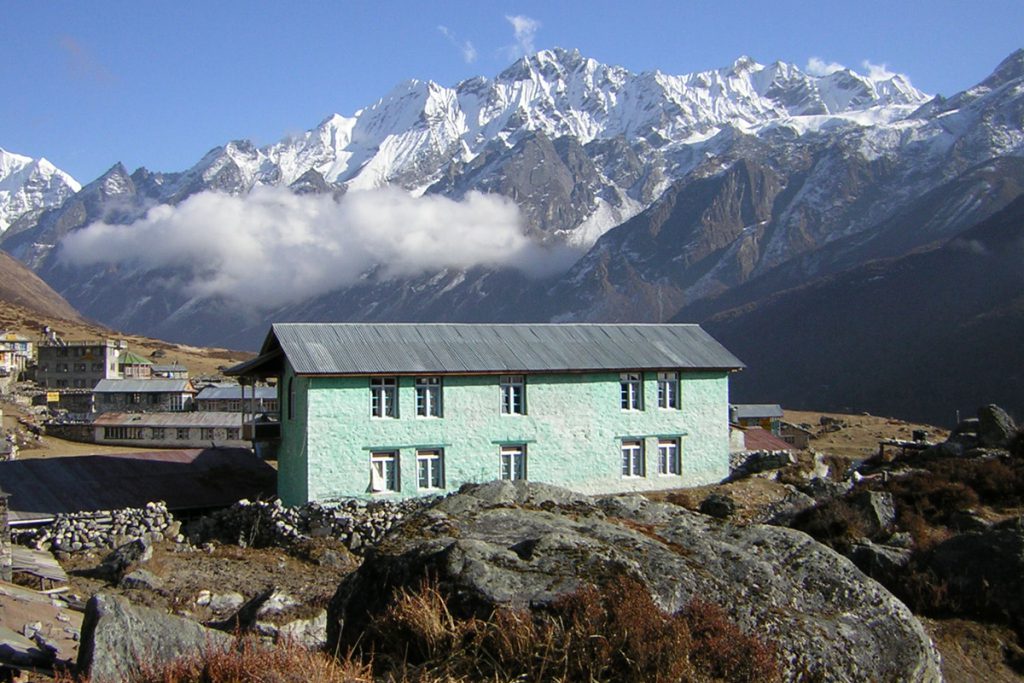 The Langtang Trek is a popular trek in Nepal. Located just 60km north of Kathmandu in Rasuwa district, Langtang is comparatively less crowded and more pristine in terms of nature and biodiversity. Vehicles can travel up to Dhunche- the district headquarters of Rasuwa District as well as Syabru, the terminus of the motor road.

As most of the trekking in Langtang entirely takes place below 4000m, the trekking trail is suitable for trekkers of all ages and under any physical condition. There are comfortable lodges, guesthouses and home stays available along the route. Langtang region is inhabited by Tamang people, whose unique Buddhist culture and tradition- that closely resembles that of Tibetans across the border- will be a plus point for travelers who love culture.

The Langtang Village (3500m) suffered maximum damage due to 2015 Earthquake. Trekking activity has since resumed in Langtang as local communities have rehabilitated their houses and trekking trails.

The locals are promoting tourism to support their rehabilitation and recovery efforts. The best way to help Langtang community and contribute to building back local economy is by trekking in Langtang region. 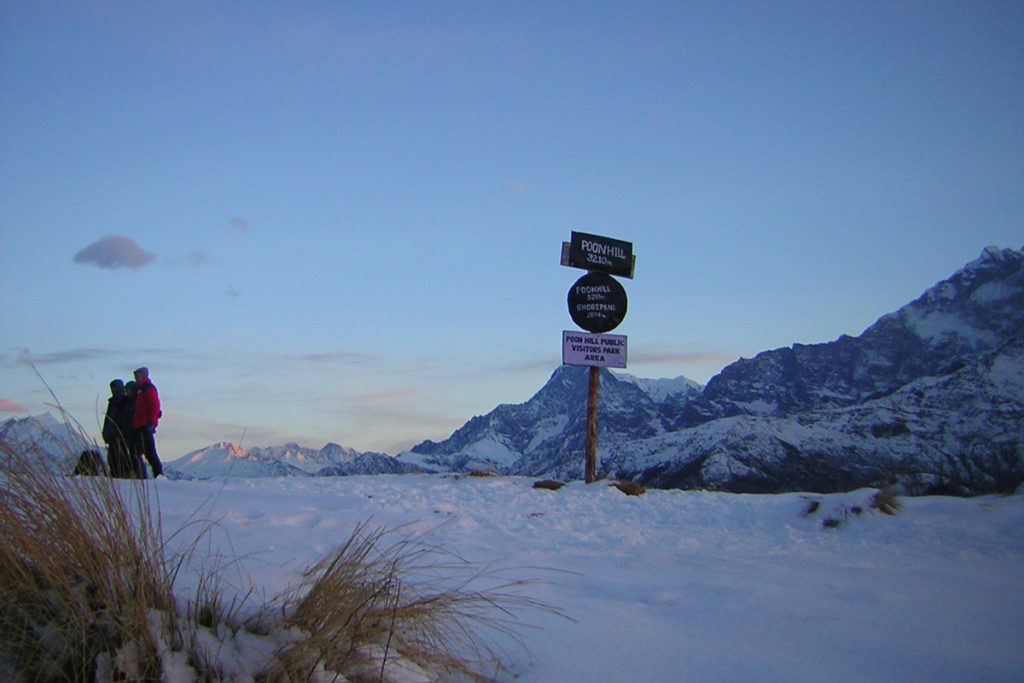 Ghorepani- Poonhill Trek takes you to the best viewpoint in the Annapurna Circuit and falls on one of the classic routes. The trek starts at Nayapool and goes uphill to Tikhedunga. It is relatively easy walk meandering through villages and rhododendron forests. The highest point of this trek is Poon Hill(3210 m) from where you will able to see a the most beautiful sunrise view over the Himalayas including Annapurna and Dhaulagir ranges. We will stop over picturesque villages at Ghorepani(2860m), Tadapani and Gandruk which are famous for rhododendrons and ethnic Magar culture. 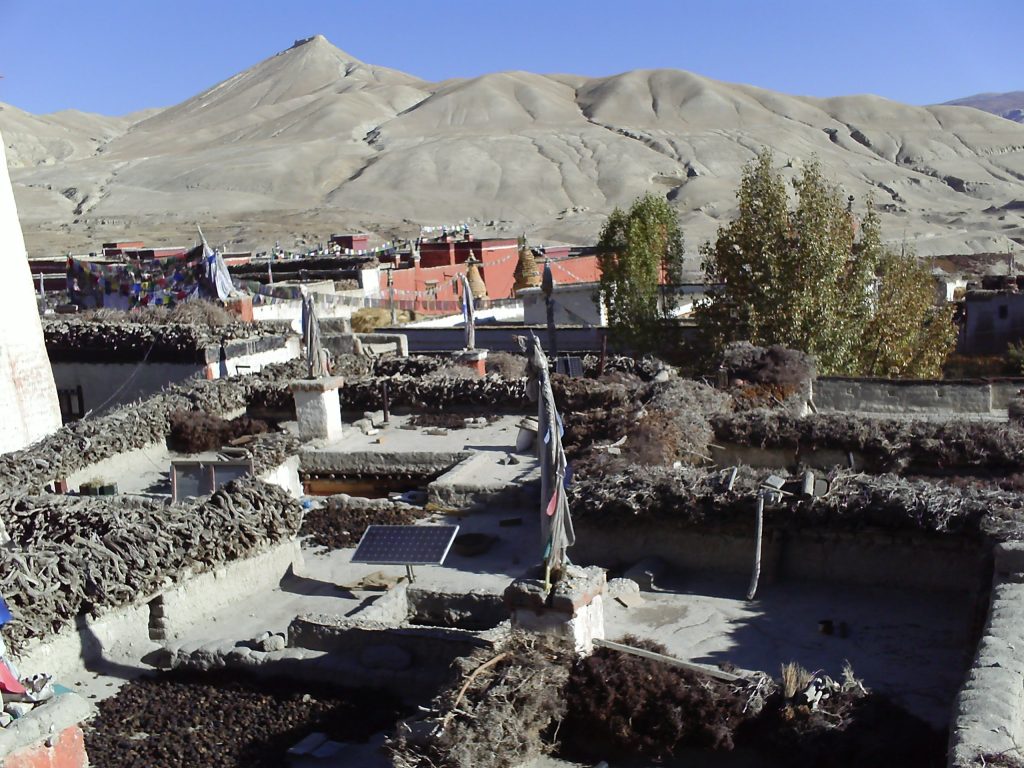 Upper Mustang is part of Mustang district situated along Nepal-Tibet border in western Nepal. It is a culturally, historically and naturally rich area of Nepal. It can be called the extension of Tibetan plateau as the culture and lifestyle of the people here are very similar to Tibetans.

The region is home to Mt. Annapurna and Mt. Dhaulagiri, the deepest gorge of Kali Gandaki Valley, the temple of Muktinath (Chumig Gyatsa) and the kingdom of Lo Manthang. The geography of Upper Mustang is very unique- it is semi arid, barren landscape with high cliffs since it gets very less rainfall even during monsoon.

People here follow Tibetan Buddhism as there are many ancient monasteries, mani walls that you can encounter along the trekking trail. The walled palace of Lo Manthang and its white washed palaces and cobbled alleyways is an impressive structure almost stuck up in the middle of almost desert- like landscape.

You will enjoy beautiful views of Himalayan peaks including Annapurna and Dhaulagiri, trek along Kali Gandaki Valley, enjoy Thakali cuisine and interact with locals. Special trekking permit has to be obtained by trekkers before stepping into Upper Mustang. 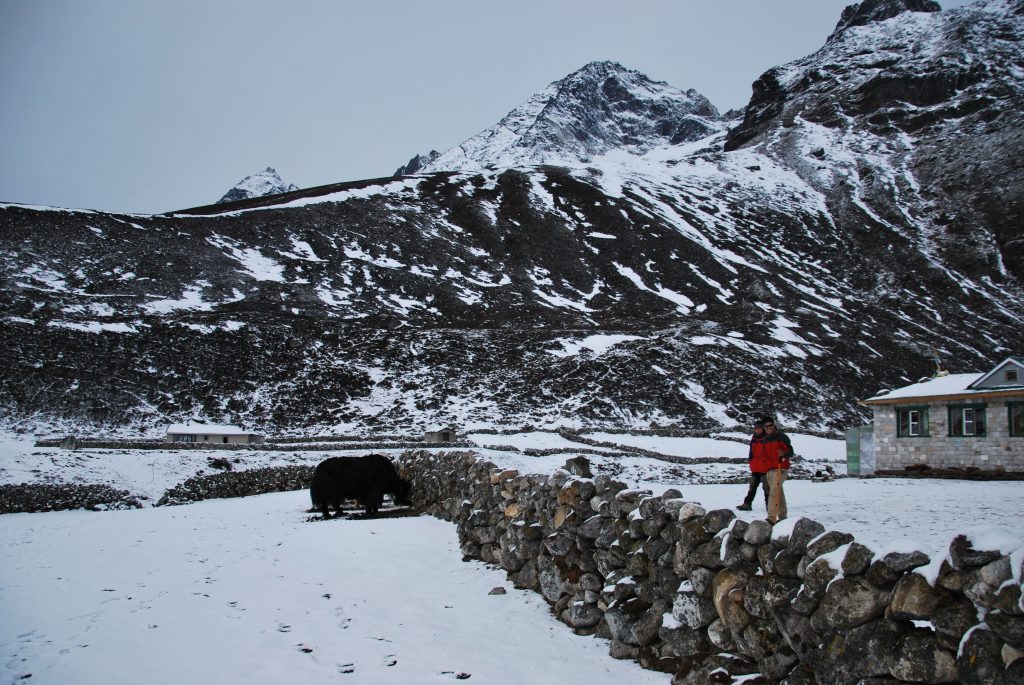 Gokyo Lake trek is one of the two popular routes in Everest region. The objective of the Gokyo Lakes trek is to reach Gokyo Lakes, one of the highest freshwater lake systems in the world as well as enjoy 360 degree panorama of world’s tallest peaks including Everest, Cho Oyu, Makalu and Lhotse.

The journey starts with a scenic Himalayan flight from Kathmandu to Lukla. The trek from Lukla to Namche follows the Dudhkosi River passing through rhododendron and pine forests. The following day you will visit Thyangboche Monastery and enjoy the majestic view of Ama Dablam. The route ahead rapidly gains altitude as you pass through villages of Dole (4110m) and Macchermo (4470m).

You will be able to visit a few of the Gokyo Lakes such as Gokyo Cho, Thonak Cho, Gyazumpa Cho, Tanjung Cho all lying between the altitudes of 4700 to 5000m. At 4750m, Gokyo Village is regarded as one of the highest Himalayan settlements. Climb the rocky Gokyo Ri (5357m) and you will be rewarded with breathtaking, 360 degree panorama of the four 8000m peaks, namely Mount Everest, Lhotse, Makalu, and Cho Oyu along with other peaks. Just east of the Gokyo Lake is Ngozumpa Glacier. It is claimed as the world’s largest glacier, which remains the source of Gokyo Lakes. 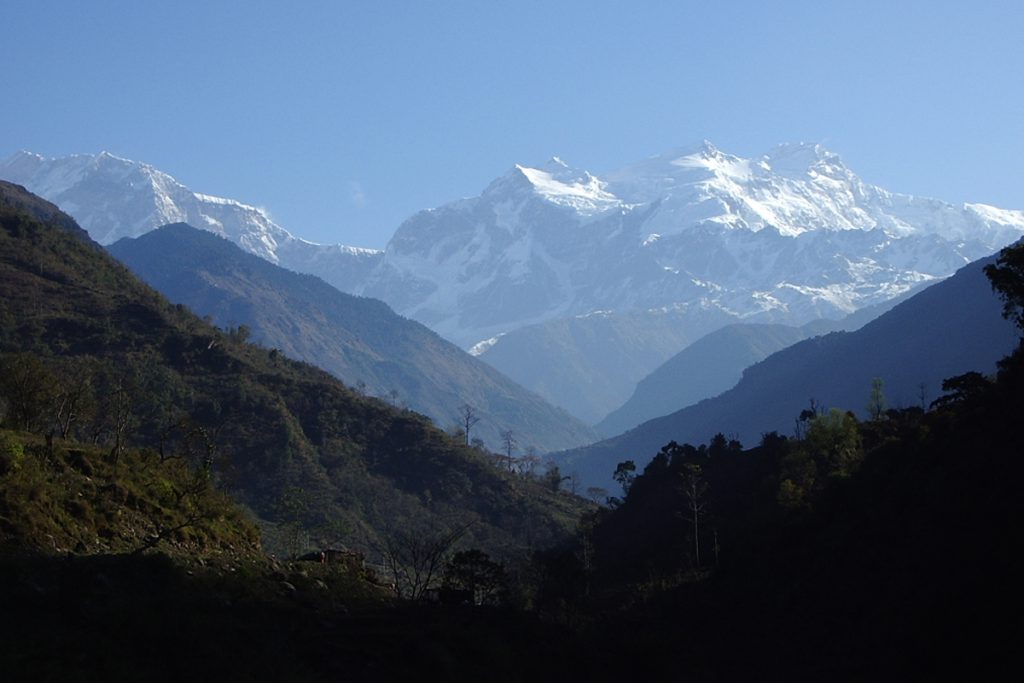 Annapurna Circuit Trekking is one of the longest and most popular treks in the Annapurna Region. It makes a full circle journey of the Annapurna Region and is a challenging adventure. We will be crossing Thorong La, the highest pass in this region, located at a height of 5416m and then visit Muktinath Temple.

A popular spot along the trek is Ghorepani, a typical Himalayan village quite famous for rhododendron flowers. We will also trek to Poon Hill, one of the best vantage point to view the Annapurna, Macchapuchre or Fish Tail and Dhaulagiri Himalayan ranges. We will be trekking into the high altitude area, often into a dry and semi desert area with fewer or no vegetation. Tilocho Base Camp(4159m) will offer views of mountains and high passes and beautiful Tilicho Lake at 4990m. Often famous for Apple pie, made in local lodges here, Annapurna Trek will touch upon the Annapurna Conservation Area Project, which preserves a rich flora and fauna biodiversity. We will start and end our trekking at the touristic town of Pokhara. This trekking trails in Nepal takes you to the heart of Mt. Dhaulagiri (8167m), the seventh highest mountain in the world. This trekking starts from Beni, a small town near the touristic town of Pokhara. As we will make our way toward the famed Mustang region by follow the track of Kali Gandaki River.

Trekking in Dhaulaigiri is more like an expedition than a trekking, owing to its wild locations, snow trails and glacier moraines and cold climes. Also termed as ‘number one’ trek in the world, majority of trekkers regard it as a classic trek, having a full range of trekking experiences from low hill to high alpines.

The trekking involves tackling some adventurous stretches like glacier and snow walking. And of course, crossing one of the most challenging and highest Himalaya passes called French Col (5240m). The pass here provides the most adorable amd impressive visual feast of Dhaulagiri that you can get unlike anywhere on earth.

Dhaulagiri Circuit Trek is a full-on camping trek and one of the longest trekking trails in Nepal. However, there are few home stay and lodging facilities available. As it is longer and physically demanding trek, every member is required to have sound fitness and good health. The team members also need to acquire good boots to wear and bring along crampons and ice axes. 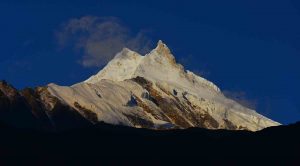 The Lower Manaslu Trek takes you to the heart of Mt. Manaslu. But to get there you have to pass through the medieval and historically most important place of Nepal: the small but strategically placed town of Gorkha. King Prithvi Narayan Shah who united Nepal over 200 years ago was born and raised in this small town. It was from here that his small but strong Gorkhali army marched to victory. Religious sites like Manakamana Temple, Himalaya Devi and Kalika temples and Gorakhnath Cave are significant landmarks that complete the story of Gorkha conquest.

But if you really want to elevate with the historical knowledge then a visit to the Gorkha palace and Gorkha Museum is a must. On the exhibition in the museum are the artifacts and personal belongings of King Prithivi Narayan shah. 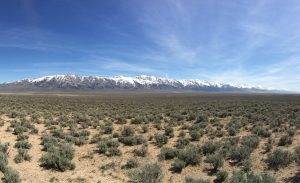 One of the best and closest spots to observe the Ganesh Himal ranges is by trekking in the Ruby Valley. The trek is moderately difficult to strenuous requiring trekkers to be a bit fit and healthy while trekking.

The trek passes through Langtang National Pak and Manaslu Conservation Area. The highest elevation reached during the trek is 4341m. Waterfalls and scared lakes such as Seto Kunda, Kalo Kunda, Ganesh Kunda and Parvati Kunda  are major attraction for tourists. These sacred sites offer a rare window to come up close with rich religious and cultural treasures.

Read about Tourism in Nepal