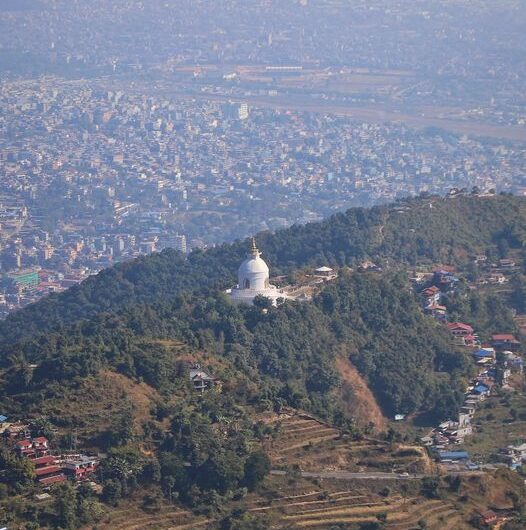 Peace Pagoda is a stunning monument located on the Anadu Hill overlooking the beautiful city Pokhara .

Introduction
Pokhara Shanti Stupa is a Buddhist monument on Anadu Hill of the former Pumdi Bhumdi Village Development Committee, in the district of Kaski, Nepal (now a part of the city of Pokhara).

Shanti Stupa in Pokhara was built by Nipponzan-Myōhōji monk Morioka Sonin with local supporters under the guidance of Nichidatsu Fujii, a Buddhist monk and the founder of Nipponzan-Myōhōji. Shanti is a Sanskrit word meaning peace, also widely used in the Nepali and Hindi languages, and Shanti Stupa means Peace Pagoda. Shanti Stupa shrine was built as a symbol of peace. Situated at the height of 1100 meters on the Anadu Hill, Nichidatsu Fujii laid the foundation stone along with relics of the Buddha on 12 September 1973. Shanti Stupa in Pokhara has also become a tourist attraction. It provides a panoramic view of the Annapurna range, Pokhara city and Fewa Lake.