Pokalde Peak or Dolma Ri Climbing
Pokalde peak or Dolma Ri peak climbing is relatively moderate peak climbing trek passing through the landmarks of Khumbu region reaches to the top of Pokhalde Peak (5,806m). Pokhalde Peak standing south of Mt. Everest is also recognized as Dolmi Ri. The trail to Pokhalde Peak while following through the usual route to Everest Base Camp deviates from Dingboche in its course. While trekking forth from Dingboche, the trail reaches at the base camp of Pokhalde Peak and then crosses Kongma La pass (5,535 meters) to reach at High camp of the peak. The base camp of Pokalde Peak is situated near a large circular lake in the middle below the Kongma La pass. The continuous trek from the High Camp through the rocky trail eventually rewards you the top of the climax of the trip from where you will have views of really extraordinary mountain spectacle: it includes Mt Makalu, Ama Dablam, Pumori, and a vast mountain vista of Khumbu region.

Upon your arrival in the Kathmandu airport (TIA), you will be greeted by a representative from Nature Trail Travels & Tours. After completing your custom formalities (Visa, etc) pick up your luggage and look for our representative with a Nature Trail Travels & Tours display board at the arrival gate. You will be then transferred to Hotel hotel. After check in you need to visit the office for preparation of the trip and to meet your crew. In the evening, we will organize a “Welcome Dinner” at an excellent traditional Nepalese Restaurant where you will enjoy a Nepalese cultural program as well as a fine meal.
2

Early morning after breakfast, we get transferred to domestic airport and fly to Lukla. After an adventurous 40 minutes flight above breathtaking green and white mountains, we reach Tenzing-Hillary Airport at Lukla. This is one of the most beautiful air routes in the world culminating in a dramatic landing on a hillside surrounded by high mountains peaks. At the airport, we meet our other crew members. We get time to stroll around while the guide divides and manages baggage to be carried by porters. We start our trek through the prosperous village of Lukla until we reach Phakding. To assist in acclimatization, we only have a short hike today. However, if interested in additional activities, take a side trip to a nearby monastery.
3

Trek starts in the morning after breakfast. The walk today is pleasant with few short uphill and downhill with multiple crossings over Dudh Koshi River and magnificent view of Mt. Thamserku (6,608m/21,675ft) from the Bengkar village. Cross some more bridges and reach the entrance of Sagarmatha National Park at Monjo, where our trekking permits are checked in order to keep record of trekkers and local trekking staffs as well. A descend and a gradual walk brings us to Jorsale, the last village until Namche Bazaar. The walk is enjoyable through the river bed and we reach Hillary Suspension Bridge. Now, as we climb up hill towards Namche Bazzar, closer and magnificent sight of Kwangde Peak, its sister peaks, Kusum Kangaru, Mt. Everest, Lhotse, Tawache, and many other fabulous mountains are viewed closer, we stop at the Chautara here to admire the view. Finally, we reach the colorful village of Namche Bazzar, the main gateway of Khumbu region.
4

After breakfast in Namche, we start our trek towards Tengboche enjoying superb view of Mt. Everest, Nuptse, Lhotse, Ama Dablam and close up view of Thamserku. Our trek follows on the gradual trail with few ups and downs overlooking magnificent view of the great Himalaya. Along the way we can spot wild lives like pheasant, musk deer, or a herd of Himalayan Thar. The trail goes gradually down up to Kayangjuma. The path eventually reaches Sansa which is the major trail junction to Gokyo valley and Everest Base Camp. The track then follows through the pine forests and after we cross the prayer flags festooned bridge over Dudh Koshi River, we reach Phunki Thenga, a small settlement with a couple of teahouses and a small army post amidst the alpine woods. After having a relaxed lunch at Phunki Thenga we then have a little tough climb steep up through the pine forests while before we reach Tengboche. Tengboche is a great place for close up views of Ama-Dablam, Nuptse, and Everest and it has a biggest Buddhist Monastery all over in Khumbu region. We visit the monastery the same day at around 3 p.m. to witness the ceremony in the principal and popular monastery of Everest region.
5

Mountains as a backdrop, the monastery in Tengboche looks spectacular more in the morning. We snap pictures of the monastery and the sceneries around and as usual start the day journey. We choose the upper trail for better views to visit Pangboche village and its ancient Monastery. We pass through several Chortens and Mani walls and small villages. We enjoy lunch with fantastic close-up views of Ama-Dablam. In the afternoon, go north to Pheriche or take the eastward trail beneath the towering north face of Ama Dablam. From here onwards the walk is fairly moderate as we enter the Imja Valley. The valley ahead will begin to open up as we approach the confluence of the Lobuche River, we descend into the river and begin the last and steepest climb of the day up to Dingboche On arrival in Dingboche, we enjoy the beautiful array of fields enclosed by stone walls to protect the barley, buckwheat and potatoes from the cold winds and grazing animals.
6

Today the climbing trail at first brings us at Kongma La Pass from where we can enjoy the views of the wide basin dotted with frozen lakes. The majestic view of Pokhalde Peak from the high pass is unavoidable. The forthcoming climbing trail also rewards us arresting views of Cholatse, Nuptse, Lhotse, Makalu, Ama Dablam and several other peaks in the Khumbu region. While enjoying the company of captivating views of the tallest mountain range in the Everest region, the trail today eventually stops at High Camp of Pokhalde Peak.
8

This will be the climax of the whole trip in the Everest region. Hence today, we will wake up early in the morning and move forth towards our destination. This section of the trip is demanding as the trip follows slightly difficult climbing trail through stones. The climbing trail ultimately reaches to the narrow rocky summit, Pokhalde Peak. Upon conquering the apex of Pokhalde Peak, we can observe the most breathtaking and panoramic views of the world’s highest mountains which include the views of Mt Makalu, Ama Dablam, Pumori, and a number of other tallest peaks in the Khumbu region. After celebrating the captivating vistas from the top of the peak, we retrace back passing through Kongma La Pass to the base camp. The next section of the trail from the base camp brings us at Dingboche.
9

The trail descends steeply downward so we need to walk slowly and under control as our shaky legs continuously battle the rocky terrain. After crossing the suspension bridges over the fast flowing Dudh Koshi and its tributaries the trail becomes more level and natural. By today we start to get warmed up by the light breeze. Any remaining sore throats and colds will be gone by today as we pass through this charming mountain air. Although we are travelling the same route down, we feel completely different views. We snap a mixture of open plains, rhododendron and pine forests, and in the distance snow covered peaks. We walk through the Sherpa villages’ noticing impressive faith in Buddhism and culture of prayer stones and prayers flag while we walk through the villages. Upon arrival in Lukla, we stretch those sore legs and recall the experiences of the last couple of weeks. We experience the culmination of a fantastic trek on a happy note with everyone back safe and sound with smile on faces!
12

Today, we fly back to Kathmandu after our long mountain journey. The early morning flight drops us in Kathmandu. We can rest and relax throughout the day at hotel. If we get interested to take some gifts home from Nepal for friends and relatives, we can visit to some nearby shops or venture out in Thamel for typical Nepalese goods. This short excursion either can be assisted by Himalayan Glacier’s guides or we can do it ourselves too. If we want to explore any other areas in Kathmandu, we have to manage time for this today as well! At the evening we will be at a fantastic celebration dinner together for successfully completing our trek to Everest Base Camp.
13

The journey within the mountains of Nepal comes to an end today! There is nothing to do but we just trade emails to travel companions and organize our photos. If we have more time we can do some shopping or sightseeing. At last approximately 3 hours before our scheduled flight, a representative from Nature Trail Travels & Tours escorts us to the airport. On our way to home we will have plenty of time to plan our next adventure trip in the wonderful country of Nepal. (B) 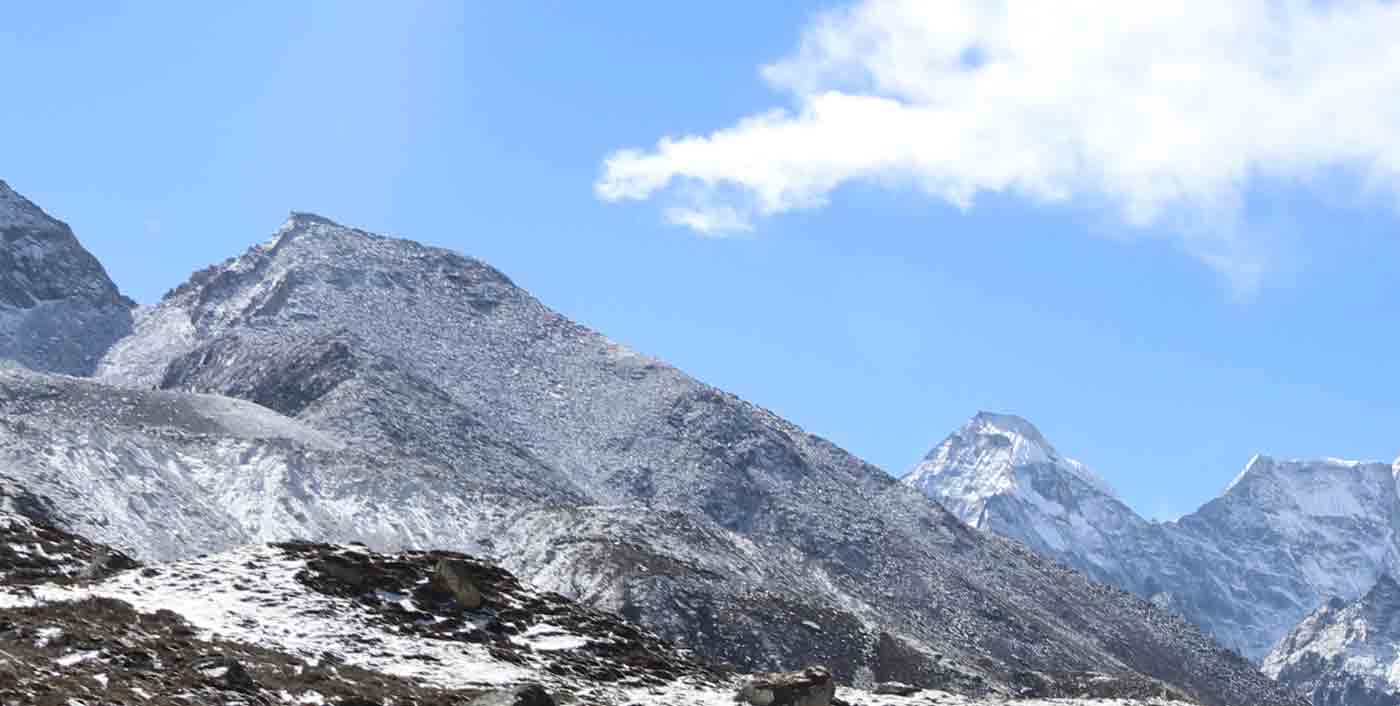 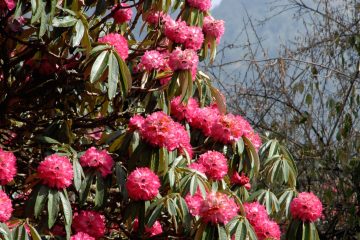 Sikles village trek is a real off
16 +
Nepal 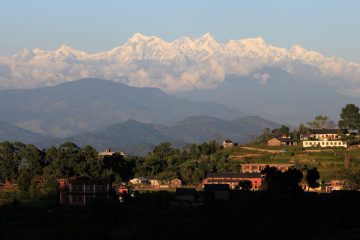 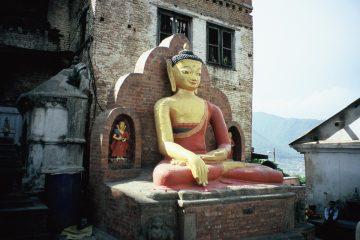 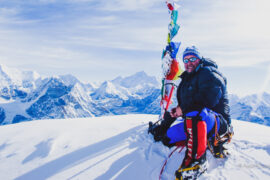 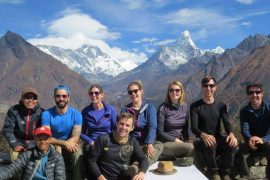