Nepal is a small country which is landlocked between two giant countries India and China. Nepal is small in size but this country is full of naturally beautiful places, rich culture, diverse ethnicity and is also home to multiple religious groups. There is a number of World Heritage site which as been listed by UNESCO in Nepal.

Nepal is an incredible nation which is full of beautiful arts and fascinating architectures. The nation is full of amazing natural and cultural heritage which attracts a huge number of tourists every year.

Today, we are going to talk about the cultural heritage sites that are listed by UNESCO in their list of world heritage sites and has great influence on the history of Nepal. Let’s learn about the places.

Kathmandu Durbar Square is the most important cultural heritage in the history of Nepal. It is the home to the Living Goddess of Nepal (Kumari), home to red monkey god, beautiful arts, and articrafts along with incredible carvings on walls and windows. 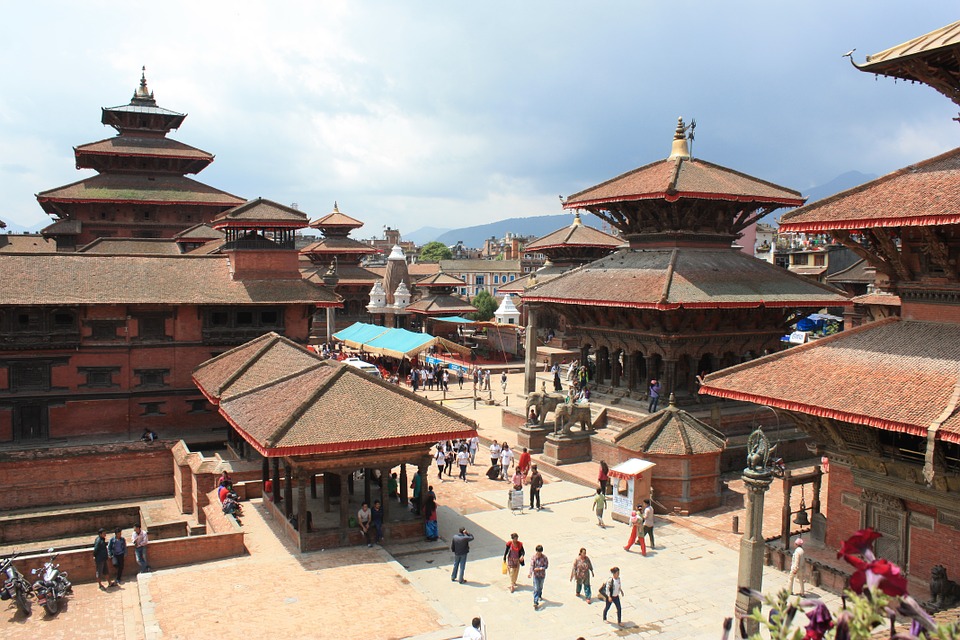 The buildings around the Durbar Square showcases the arts and architectures of the Malla dynasty, which led to the terrific competition between the palaces of Kathmandu, Patan, and Bhaktapur.

For people, it was an artistic warfare seeking to outdo each other in fabulous structures. Kings replicated all their neighbors’ built within a grander style and

A tourist, who wanders around the durbar square foot, will observe around the temple at the pagoda architectural design, the temple of Goddess Taleju (who played with King Jaya Prakash Malla) along with a picture of Shiva and Parvati sitting collectively one of the numerous monuments.

This remainder house is thought to have been built using the wood of one shrub and is the origin where the Kathmandu Valley got its name. Nearby are fantastic drums that were defeated to declare royal decrees.

All of the woodcarvings, statues, and structure within this area are extremely nice and Kathmandu Durbar Square is one of the most significant sights for travelers to visit.

Bhaktapur Durbar square is situated in the Bhaktapur district, it is the palace from where Malla kings ruled over the kingdom.  It is one of the most famous areas around to go to in Nepal. It reflects the medieval culture of Nepal. 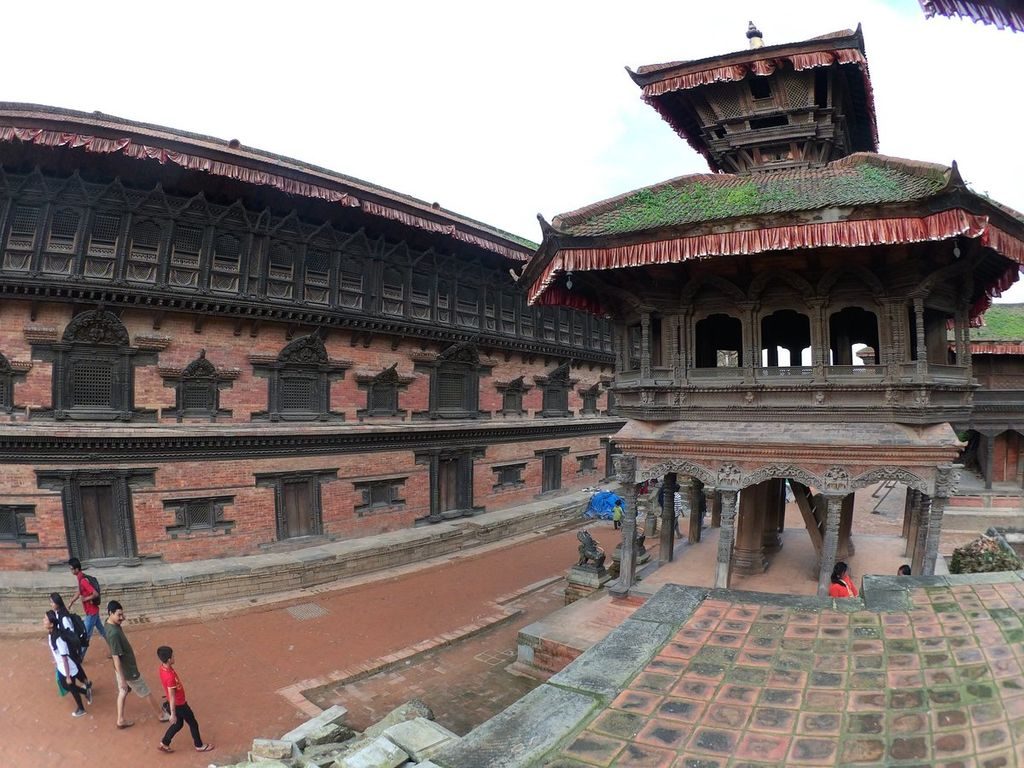 This place is a good instance of cultural and historical crafts, drawings and handicrafts.  It’s filled with the temples created in the Pagoda and Shikhara layouts. The fifty -five windows Durbar and Sundhokha (Golden gate) constructed during the regime of Malla king along with the statue of Bhupteendra Malla along with the five tales temple (Panch Talle Mandir) is located within this city.

Bhaktapur is a must visit place if someone wants to have a complete cultural tour of Nepal as Bhaktapur is one of the oldest city and they have protected their culture until now and stayed away from modernization. 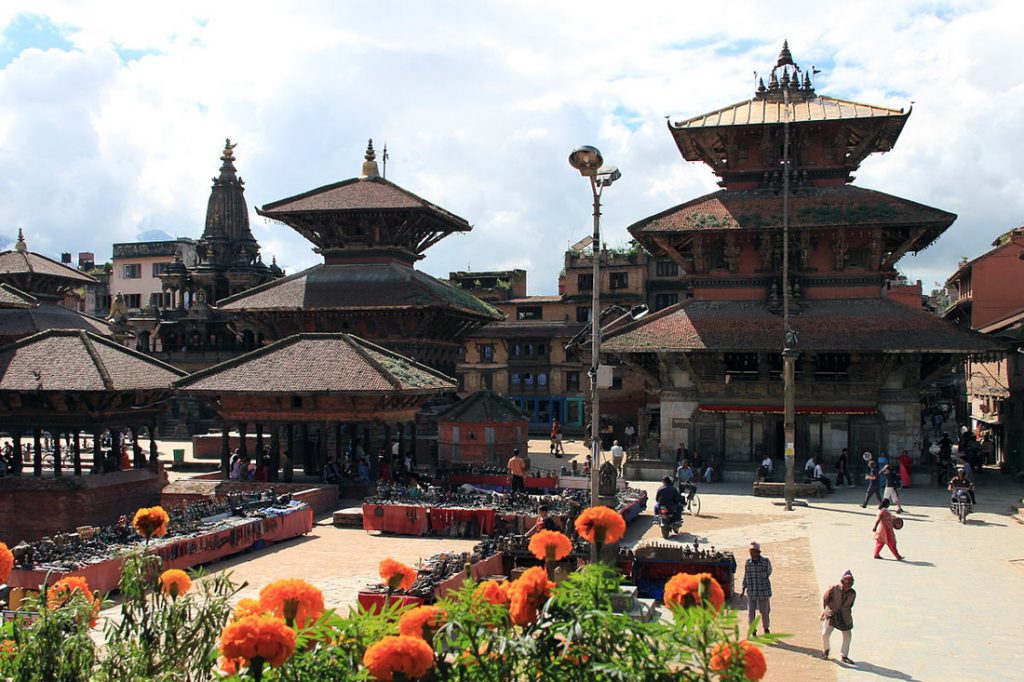 The stupas, Rato Machchhindra Nath, along with other different temples build in the span of Ashoka into the time of Malla dynasty are still adding the aesthetical beauty for this town.  The twenty-one spires (Gajurs) of Krishna Mandir are completely made of stone. Apart from it, the windows of elephant bones (hides), the statue of Yog Narendra Malla, Taleju temple, rock tape, along with ponds, etc. ) will be the artistic functions of Lalitpur Durbar Square.

This palace had been the house of Malla kings throughout the (Malla) period.  You will find the 3 Major country lawns at the mansion: Mul Chowk, Sundari Chowk, and Keshav Narayan Chowk.  The square is filled with temples, shrines, Chowks, taps, ponds and traditional crafts, carvings, and paintings.  The Krishna temple constructed from the Shikhar design with 21 pinnacles is your beautiful temple comprising stone.

The Royal Bath, yet another rock design, is your master bit of Malla artwork.  The other temples such as Kumbheswor Mahadev, Rato Machhindranath, Bhimsen, Maha Bouddha, a part of Yog Narendra, the dividers of elephant hides and bones, etc. will be of the excellent attention to the people.

Boudhanath is one of the largest stupas in South Asia, and it is now the focus of Tibetan Buddhism in Nepal.

Tibetan refugees entered Nepal from Tibet in the 1950s and built many, and even formed Little Tibet in Nepal. A lot of the refugees decided to reside around Boudhanath.

This”Little Tibet” remains the best location from the Valley to celebrate Tibetan lifestyle.  Monks walk around in maroon robes. Buddhists walk with prayer wheels in their hands along with the principles of prostration are introduced to the Buddha because worshippers circumambulate the stupa in their own hands and knees, bowing down with their lord.

A lot of men and women feel that Boudhanath was built in the fifth century, but definite proof is lacking. The stupa is thought to entomb the remains of a Kasyap blossom who’s venerable equally to Buddhists and Hindus.  It is one of the best places to visit to achieve the peace of mind and body.

You can see smaller stupas are at the bottom. There are conveniently located restaurants using roof-top patios deliver fantastic food and superior views of Bouddhanath around the Stupa.

The Buddhist temple of Swayambhunath is located on the surface of a mountain in Kathmandu, is among the most common holy places and immediately recognizable symbol of Nepal.

The temple is colloquially called”monkey temple” due to the large tribe of drifting monkeys are observed there.  It’s thought that this temple has been constructed before the 5th century.” 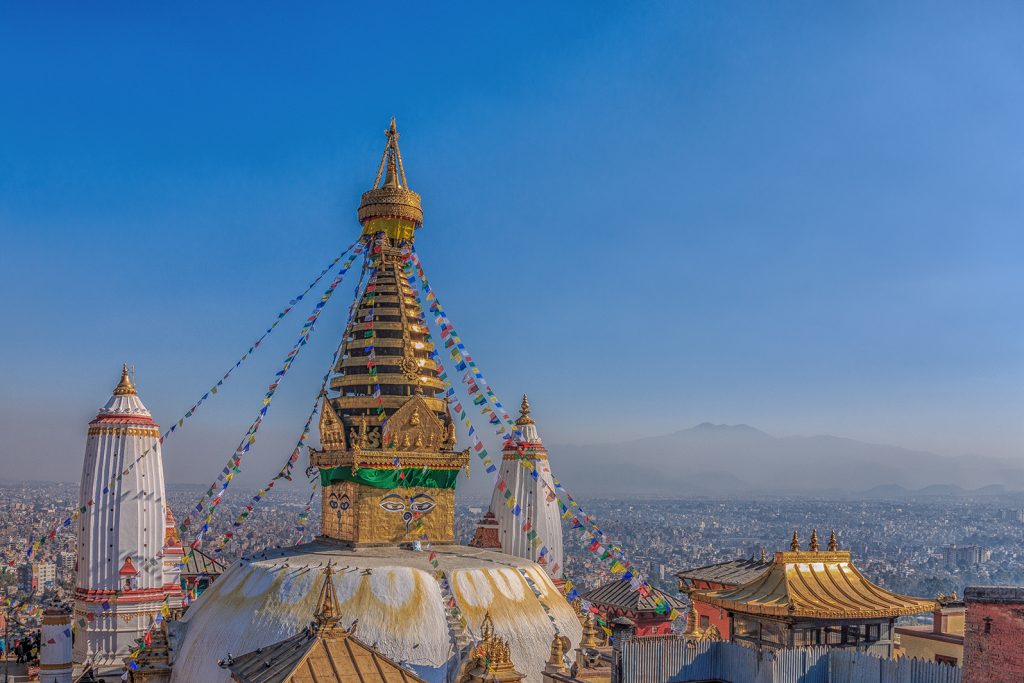 Swayambhunath temple is thought of as the sign of religious tolerance since there’s the temple of Hindu goddess Saraswati.  You will find different stupas and idols additionally. Lately, the most massive statue of Buddha was assembled close to Swayambhunath temple.

You can have an amazing view of Kathmandu valley from the top of this temple which is like the feast to the eyes. This is a must visit the place during a trip to Kathmandu. 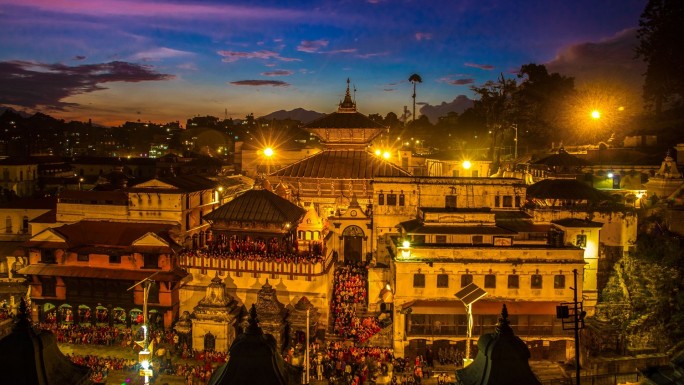 There is a temple within the Pashupatinath region called Guheswori, that was created for Satidevi (Shiva’s first wife who committed her whole life for the husband).  The principal temple in Pashupatinath has the gold roof and four silver doorways around.

Every year thousands of Pilgrimages come to visit this temple during Shivaratri. The temple has very high importance in the history of Nepal.

Changunarayan Temple situated in the Changu village is considered as the oldest temple in the Kathmandu Valley.  The temple currently covers centuries old Nepalese history.

A sixth-century rock statue indicates the cosmic kind of Vishnu, although the other statue remembers his incarnation when he conquered the wicked king Bali.  Vishnu because Narasingha disemboweling a fanatic is very magnificent. 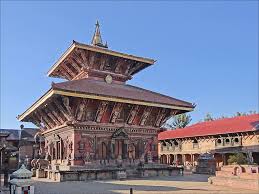 The bronze doors glow in the evening sun, dragons decorate the bells and fine devas stare out of the walls.

Changunarayan Temple is believed to be built during the rule of Lichchhavi king Mandev. There is a lord Vishnu’s idol with ten heads and ten arms. This is a fine example of stone carving from the 5th century.

Changunarayan Temple is built in Pagoda style which is a popular style in Nepal. There are various inscriptions carved over stones, woods and metal craft which shows the artifacts of the 5th century.

Lumbini has been a sacred ground for Buddhists all over the world.  It is the birthplace of Lord Gautam Buddha and spiritual destination for Buddhist peoples. The holy garden and environment of Lumbini possess the remains of lots of the early stupas and monasteries. 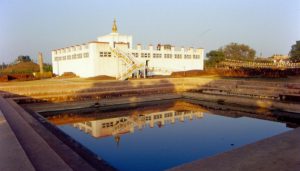 A massive stone pillar created by Emperor Ashoka at 250 BC conveys an inscription concerning the arrival of the Buddha. A significant part Lumbini is that the temple of Maya Devi.  It’s a rock picture of Maya Devi giving birth to Lord Buddha. It’s been well worn with the strokes of bare girls trusting for fertility.

On the south side of the Mayadevi temple, there is a pool in which Queen Maya Devi is said to have taken a bath and granted that her son his first purification bath. A quiet garden, surrounded by the leafy Bo tree (that the kind of tree where Buddha received enlightenment) plus a recently planted woods nearby lend an aura of tranquility that bespeaks Buddha’s teachings.

The exact nativity site is marked by an Ashokan Pillar erected by Emperor Ashoka in 249 BC. A marker stone discovered in the Mayadevi Temple which stands adjacent to this pillar is regarded as the exact spot where Siddhartha Gautam Buddha was born. Another sacred site in the Garden is the Puskarni Pond.

There are as many as 62 archaeological sites scattered around Lumbini such as Tilaurakot, Kudan, Gothihawa, Niglihawa, Sagarhawa, Aurorakot, Devadaha, and Ramagrama.  Each of these sites hold significance in the life and times of Buddha are highly recommended for any visitors. Other sites of importance in Lumbini are Buddhist Library, Crane Sanctuary, world peace stupa, international monastic zones, and numerous monasteries and viharas that dot the landscape.

Sagarmatha National Park is situated in Solukhumbu area of the Mount Everest Region and was created on 19th July 1976 AD.  It was commissioned at the World Heritage Site in 1976 AD. 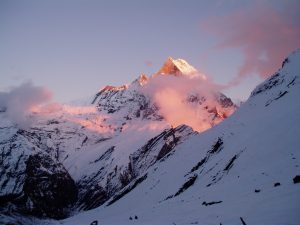 Sagarmatha National Park is in total area 1148 square kilometer region of the Everest Region.  Mount Everest, the highest peak of the earth is in this area. Also, various other high and beautiful mountains such as Lhotse, Choyu, Nuptse, Pumori, Amadablam, respectively are located at Sagarmatha National Park.

Every year around a hundred thousands of tourist comes for the famous Everest Base camp trek which also lies in this place. The Everest region falls in Solukhumbu district, which is home to the highest mountain in the world, Mt. Everest or Chomolungma. The area has been designated national protected area as it is home to such rare flora and fauna as Snow Leopard and Red Panda. Mammal species include common langur, jackal, Himalayan black bear, Himalayan weasel, masked palm civet, snow leopard, Himalayan musk deer, goral, mol, Tibetan water shrew, Himalayan water shrew, marmot, rat and house mouse.

A visit to Everest is not complete without a tour of Namche Bazaar, the cultural capital of the Sherpa people.  Tengboche Monastery in Everest region is one of the biggest monasteries in the Himalayas.

Everest Base Camp Trek in Nepal

Chitwan National park is the very first natural heritage of Nepal to get listed in the UNESCO world heritage list. The national park is situated in Chitwan which is in south-central of Nepal in the inner Terai region. This national park has been on the top list by the tourists. 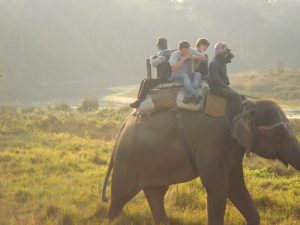 It contains various types of animals and plants which are preserved here. Some famous animals which are protected in this national park are One horn Rhino, Royal Bengal tiger, Elephants and many more.

The park is spread in an area 932 sq. km. and remains the most visited destination in Nepal. The park consists of lush vegetation, a mosaic of riverine Sal forest and grasslands, the fragile Siwalik-hill ecosystem as well as alluvial floodplains.

Exceptionally high in species diversity, there have been 31% of mammals, 61% of birds, 34% of amphibians and reptiles, and 65% of fishes recorded in the park. Further, over 400 species of both migratory and resident bird species have been observed. Because of it precious biodiversity, the park has additionally been recognized as one of the world’s’ biodiversity hotspots.

So, above are the list of the world heritage sites in Nepa listed by UNESCO. We hope you liked the article. If you are planning to visit or take a trip to Nepal, please let us assist you with our affordable and reliable tours and travel services. For more inquiry, please drop us a mail at info@allnepal.com

Previous postWhy you should visit Nepal for Peace of Mind ?
Next postTop ten trekking trails in Nepal