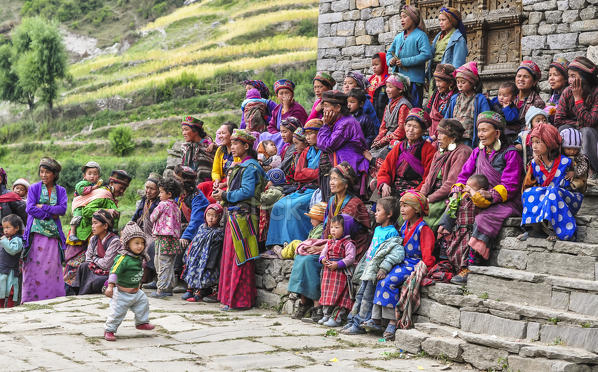 Lapton is 23 years old, running Community Lodge and a commuter to Kathmandu. His younger brother, 18, married with children of 5 and 4, is settled in the village and serves hands to his father. Child marriage is well beyond acceptance, and in fact, encouraged by the elders. You probably were ignited by the feeling that your adolescence ‘puppy love’ was all you would die for. Well, that may just come true here. Read Previous Blogs: Gatlang - A traveler's epitome Part II Without a second thought, adolescents marry their chosen crush as early as 13, ofcourse with a ceremonial approval by the villagers. It’s feast time! Lapton confronts the convention. He questions the choice of decision. With a grin on his face, he avows, “… there are beautiful girls outside Gatlang, you know, in Kathmandu.” He chuckles. I am stoned. I nod. Hail to the city! Or lament? I do not know. Previous Blog: Gatlang – Part III Part IV Part V The differences arise when there is a frame of reference. Without that, all is same, and the same is all. I take my excuse, and thank them for their warm hospitality. Next stop – the secondary school. The school introduced 10th grade this year, with only one teacher for all subjects. The teacher himself had studied till 6th grade and had been teaching for 15 years. What say? Lack of expertise or admiration of experience? Either way, I hear no complaints. I guess that doesn’t matter after all. Route back to the village, and it unfolds seamlessly as morning rises above the heads of the people. There’s only one thing that triggers the synchrony of the people here – survival! The hardship is valued beyond measures, and why not? It is the feeding stream in this remote land.

Lapton is 23 years old, running Community Lodge and a commuter to Kathmandu. His younger brother, 18, married with children of 5 and

A Journey into the Himalayas – Come live the experience

It is neither my quirky dreams, nor my religion. But there are few things in life you know you can’t go without. You wake up with a thrust for love, lust, and morsels; and yet, you know there is something else that completes you. For me, it is the mighty mountains – the Great Himalayas. Telling stories across all-too-busy ears through photographs and events is never an easy task. Because the actual experience is far removed from the atmosphere where the story is told. As such, the story told easily becomes a third party interpretation. The intensity of the adventure is more often either diluted or spiced up to feed the need of the audience one is faced with. The harshness of the environments encountered in the journeys allows little comfort to exercise creativity in developing stories as one experience in real. One has to depend on flailing memories to account episodes and sensations during the journeys. This is my modest attempt to share such escapades and events as they unfold in the field, and entailing feelings from rather ordinary treks in the Himalayas. In this series of treks from Langtang, I do not promise to entertain you with fascinating stories from far away places. But to depict the beauty and gravity of the life that is shared by millions of people, wildlife and their environments. Read more exciting blog: Nagthali - Tamang Heritage Trail, Langtang

It is neither my quirky dreams, nor my religion. But there are few things in life you know you can’t go without. You